McDonogh #35 has a long list of notable alumni, including many political figures and “firsts” among black leaders in our nation, from city council members and judges. We were once again escorted by Damon Smothers, who reminded the students once they gathered that they are part of a proud, strong heritage at McDonogh #35.

Since the school was holding state testing on the day of our visit, we only were able to meet a portion of the student body. They entered the auditorium with a lot of energy and excitement. Who doesn’t like getting to go to an assembly on testing day, right?

It was a completely different kind of experience for Ivan and me. We were joined at McDonogh #35 by our BNI franchise owner for the area, Tim Paulin, who sat in the front row with us. 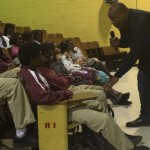 This time, as Derrick spoke, there was a lot more chatter from the students as they interacted with him. He moved among them, reaching out to them with his voice and his gestures. They really connected with him and the message of encouragement he gave. “You never know who you are sitting with,” he said at one point. He went on to point us out to the kids and tell them that an
“international business mogul and his wife” were with them, because we wanted to learn more about what their needs are, so we can 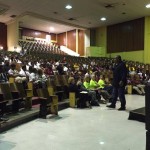 take that back out to our business associates to let you all know. Ivan and I are reluctant to take on this label, but have to admit that to the students, that is exactly what they think of us.

We had been hoping that some local media outlets would have picked up on our advance press releases and actually have attended the assemblies with us. Once we got there, though, we quickly realized that it was better for the STUDENTS to see us there without cameras and journalists. We do not want Business Voices to turn into a media circus. That would give the students an impression we don’t want to give, right?

We truly are coming in to their schools to meet them, to listen to what they need and to find ways to plug our BNI chapters and members into the equation so a real-time solution to their needs can be found. (The only reason I would be interested in any media coverage at all would be to give others the inkling that they can join our 5-5-5 2015 movement and help us improve schools 5 at a time.)

And then the most unexpected thing of the entire day happened. “Are you a leader?” Derrick boomed out from the front of the room. Like popcorn popping all around the room, the kids shouted out, “Yeah!” “You bet!” “Sure am.” He took it a step further, “How many of you think you can have leadership influence on others? Raise your hands. I want you to come up here with me. Come up here with me!” He invited them forward.

He knew going in that he was going to call out students for leadership. He thought maybe ten or 12 students would answer that call. Imagine our surprise when about 25 students surged forward and took their places in a line across the front of the room, facing their peers. Antonio sped up and down the line in his motorized chair and started giving them each a Stand Up wristband to wear.

Derrick turned and faced these 25 students. He shared with them that he was going to personally see that they received leadership training and skills to be the first Stand Up Youth Ambassador Program. And he was blunt. “Some of you are going to be kicked out. And some of you are going to really become leaders.” It was a powerful moment. 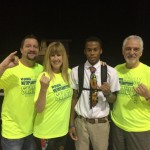 After the assembly closed and the students filed out, one young student, a junior, stayed behind. He came up to each one of us, looked us square in the eyes and thanked us one by one for coming, and then he hugged each of us. I think Derrick has his student leader for the Stand Up Youth Ambassador Program at McDonogh #35, don’t you?

What a transformational 40 minutes that was. The thing I like best about it is that it won’t stop with just that assembly.

McDonogh #35. And our local Executive Director, Tim Paulin, will be taking the needs of these students and the students at John H. Martyn Alternative School back to the BNI members to show the community that when BNI says, “How can I help you?” we really mean it!

Next stop: Smothers Academy (To be continued)